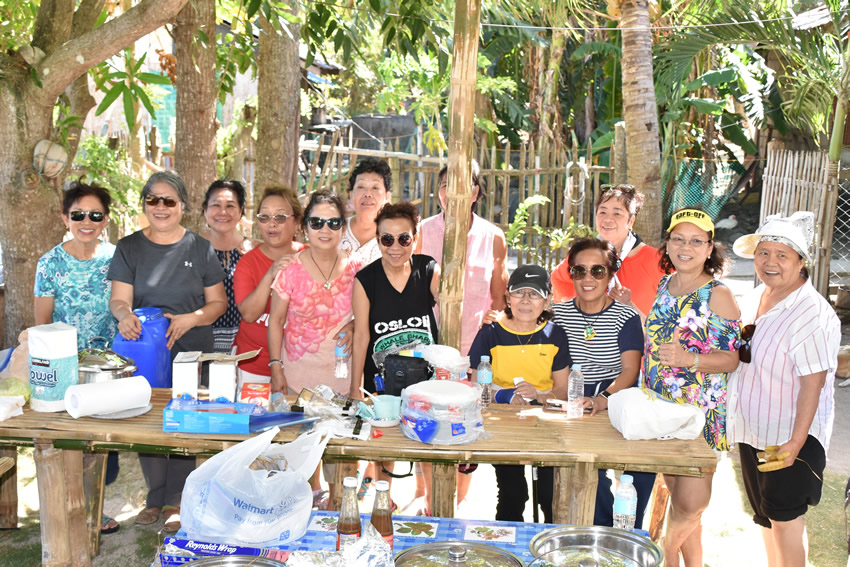 The Golden Jubilarians are all smiles during their reunion at Pan de Azucar Island, Tambaliza, Concepcion, Iloilo.

Memory… just like the famous song from the Broadway musical Cats, the Central Philippine University (CPU) College of Nursing class of 1969, a.k.a. the 69ers, dreamed of the old days and remembered that life was beautiful then as they commemorated their Golden Jubilee from February 7 to 12, 2019. Attended by 25 69ers and some 12 husbands, the class reunion was celebrated in the provinces of Iloilo and Antique, and in six different venues: CPU; Iloilo Mission Hospital (IMH); Tambaliza/Pan de Azucar Island in Concepcion, Iloilo; Dingle, Iloilo; San Jose, Antique; and Pavia, Iloilo.

The second day started earlier than the day before. By 6:30 AM, the convoy of two rented CPU vans replete with the CPU College of Nursing Golden Jubilee tarpaulins were ready to roll.

The road leading to Concepcion from CPU is 93.3 kilometers long, traversing through the municipalities of Pavia, Zarraga, part of Dumangas, Barotac Nuevo, Anilao, Banate, Barotac Viejo, and Ajuy. The long drive was somewhat challenging to the group, so they had to take a few pee breaks on the way. Finally arriving in Concepcion, a pump boat was waiting at the pier to take the 69ers for a boat ride to Tambaliza/Pan de Azucar Island, one of the islands in the municipality of Concepcion.

The boat ride was reminiscent of a song 69ers sang on days off during a year of rotation in Capiz Emmanuel Hospital in Roxas City:

The boat rides we would take…

The looks we got when we got back…

How could a love that seemed so right go wrong?

The things we did last summer…

After about a 35-minute boat ride, the 69ers docked around noontime in Tambaliza/Pan de Azucar Island. The Arizona-based hosts, Erlinda (Arlai) Arlos-Zach and husband Ron were at the store to welcome the classmates. The most senior among the reunion attendees, Evelyn Berja-Lagarde (a.k.a. Manay) came all the way from New York City to join this once-in-a-lifetime event not minding her limited physical mobility at all, even if she had to be carried off the boat to disembark. Bless her heart!

From Arlai’s house, the island was a postcard-perfect picture of the sea meeting the sky in the east and the majestic Pan de Azucar mountain in the north. What a sight to behold! The medley of foods—fiesta-sa-nayon style—were served in a newly constructed nipa hut built especially for the occasion. Ahhh! Arlai and Ron must have stayed awake for days planning and mobilizing everything to offer such a spread. Well, another broken promise for weight-watchers!

After lunch, while others were enjoying the freshly-harvested young coconuts, Arlai led a small group on a trek up to a plateau of a small hill that cradles two institutions of learning in the island: The Deogracias G. Arlos National High School named after her father and the elementary school, Fernando A. Arlos Memorial School, named after her paternal grandfather. What we only knew was that Arlai lived in a pulo in Concepcion. However, humble and private that she is, it was unknown to most 69ers that her father and paternal grandfather used to own the land that was donated to the local high school and elementary school. What an honor to be a classmate belonging to a family of philanthropists!

The drive back to CPU was an uneventful denouement. However, the memorable trip to Tambaliza would surely run down in our class history.