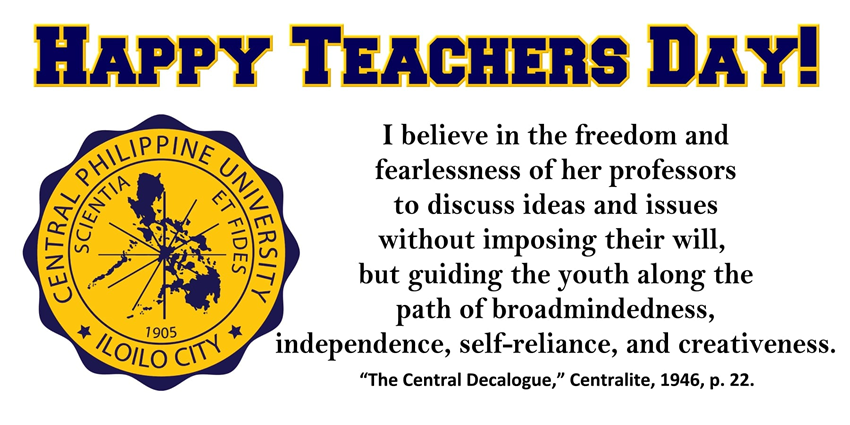 The World Teachers’ Day was observed on October 5, 2021. The date was chosen by United Nations Educational, Scientific and Cultural Organization (UNESCO) in 1994. The day is the anniversary of the adoption of the 1966 ILO/UNESCO Recommendation concerning the Status of Teachers.

At all levels, students greeted one or more of their teachers who poured sweat and effort into educating them. Teachers deserve to be recognized and honored for their sacrifices and their desire to help mold the students towards a better future.

In observance of Teachers’ Day, here is the Central Decalogue that is a good reminder to all teachers of Central Philippine University. The oldest version can be found in the 1946 issue of the Centralite. Here is a copy from the 1960 Student handbook, and reprinted in the Central Time 1905-2005, p.22.

“I believe in Central Philippine University because she believes in the future of the Filipino youth;

I believe in her democratic spirit;

I believe in her emphasis on scholarship and character is sacred;

I believe in her teaching that the human personality is sacred and its dignity should be upheld over and above the arrogance of wealth and the tyranny of power;

I believe in her educating the poor in order to lift them up and free them from the shackles of social and religious prejudice, ignorance, and superstition;

I believe in her educating the rich in order to imbue them with high social conscience for imaginative vision, generous attitudes, civilized humility, and sacrificial dedication to the welfare of the people;

I believe in her classroom instruction which insists that students must be free to explore honestly any area of knowledge and push back the horizons of their intellect and educate the emotions of the heart;

I believe in the freedom and fearlessness of her professors to discuss ideas and issues without imposing their will, but guiding the youth along the path of broadmindedness, independence, self-reliance, and creativeness;

I believe in the necessity of research in the atmosphere of freedom because a university is not truly a university unless it carries on research;

I believe that a university with a Christian base and a Christian orientation should be more progressive and more daring in pressing ahead of its times in all things, to the end that the human spirit will come to full flowering under constant ferment.”

Here are some thoughts on how valuable are our teachers:

“Teachers open the door. You enter by yourself”- Chinese proverb

“The dream begins with a teacher who believes in you, who tugs, pushes and leads you to the next plateau; sometimes poking you with a sharp stick called truth.” – Dan Rather

“A teacher affects eternity. You can never tell where his influence stops.” – Anon

“A good teacher can inspire hope, ignite imagination and instill a love of learning.” – Brad Henry