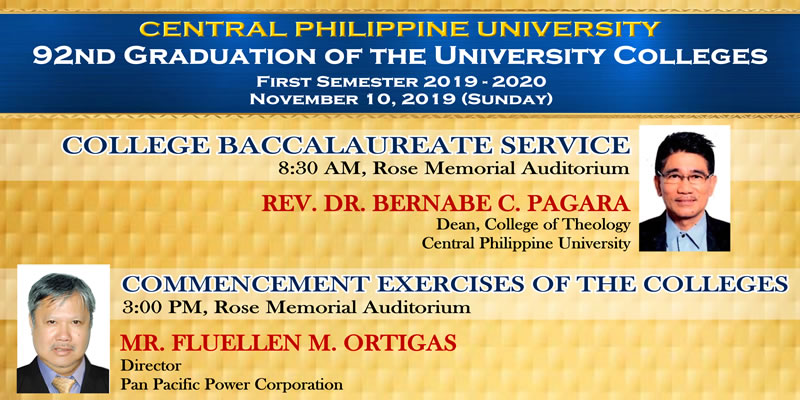 Central Philippine University will hold its Baccalaureate Service and Commencement Exercises of the Colleges, on November 10, 2019, at 8:30 AM and 3:00 PM, respectively. Both programs will be held at the Rose Memorial Auditorium. Four hundred four graduates from different CPU colleges will march on Sunday. They include graduates from the 1st Semester School Year 2019-2020 and Summer 2019.

The Baccalaureate Speaker, Rev. Dr. Bernabe C. Pagara, is the Dean of CPU College of Theology. He received a Certificate in Christian Education from the Convention Baptist Bible College (CBBC), Bacolod City, in 1978. He graduated cum laude when he finished his Bachelor of Theology from Central Philippine University in 1983. He earned his Master of Divinity (with honors) from the Asian Theological Seminary in Quezon City, Metro Manila in 1991, Master of Theology from the Asian Center for Theological Studies and Mission in Seoul, South Korea in 1996, and Doctor of Theology, major in Biblical Studies-New Testament from the Asia Baptist Graduate Theological Seminary in Baguio City in 2003. Dr. Pagara also serves as Vice President and Auditor in 2016 and 2017-2020, respectively, for the Visayas of the Samahan ng Teolohikal na Edukasyon ng Pilipinas (STEP). He has also served in different capacities in many other institutions.

Ortigas studied at CPU from Kindergarten to College. He finished his degree in Bachelor of Arts in Political Science. He served as Governor of the province of High School, Senate President, and CPUR President in 1968 during his student days in CPU. In this year, he was awarded as one of the Ten Outstanding Students of the Philippines (TOSP). “His strong political idealism and ardent dream of a better Philippines led him to join and organize movements and mass actions which caused him to become a political prisoner for almost five years in the 1970s. He was later allowed political asylum in Malaysia and later into the United States, where he was actively involved in the activities in the Movement for a Free Philippines in Washington DC.”

He was professionally engaged with various industries and partnerships with different projects in the Philippines and abroad. He has worked as Senior Legislative Assistant to then Senator Benigno “Ninoy” Aquino in the early seventies. At present, Ortigas is connected with Pan Pacific Power Corporation.