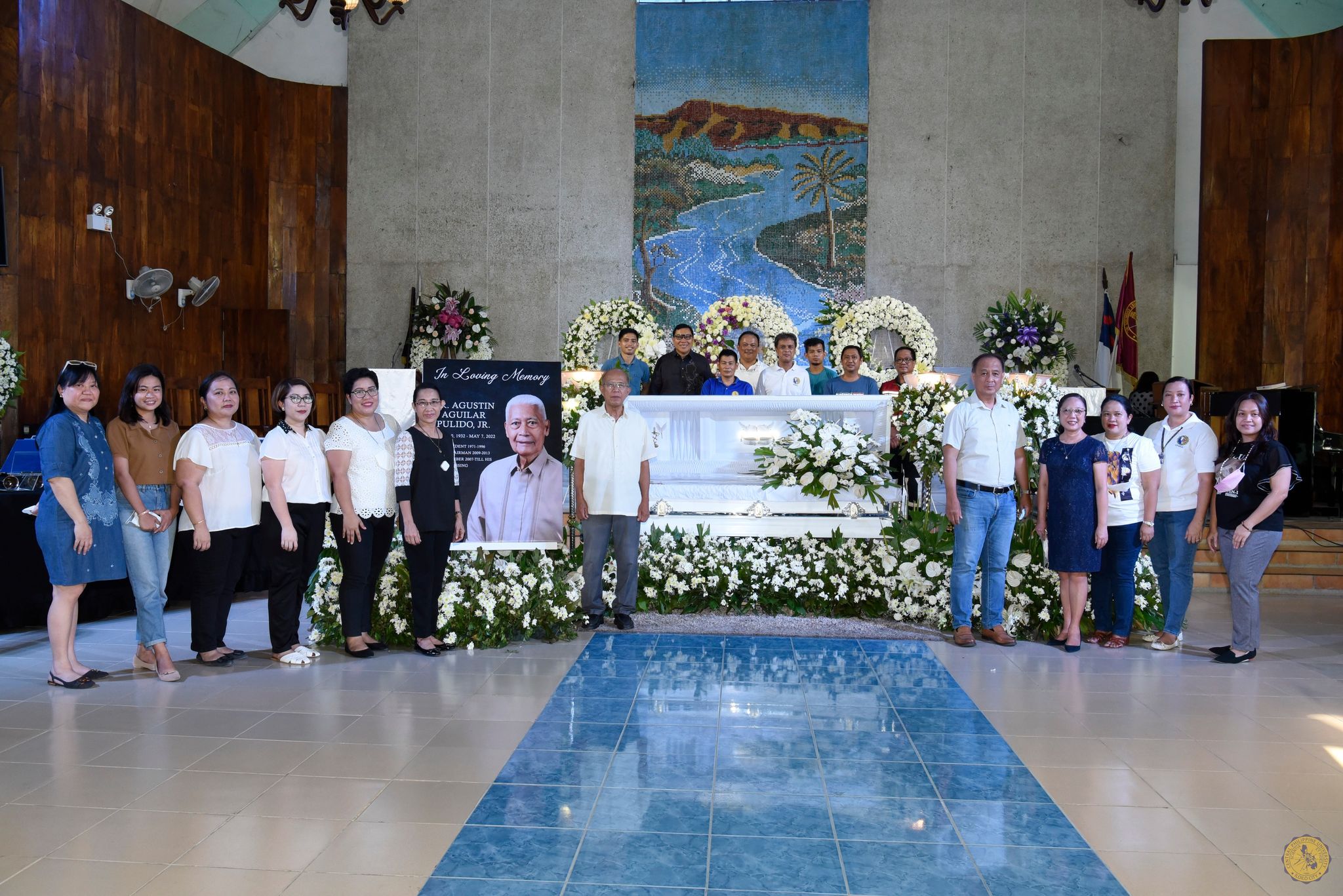 Some members of the faculty and staff led by CPU President Teodoro C. Robles attended the necrological service in honor of Dr. Agustin A. Pulido.

A necrological service in honor of Central Philippine University’s beloved Dr. Agustin Aguilar Pulido, Jr. was held on May 12, 2022 at the University Church, CPU. Dr. Pulido returned to his creator on May 7, 2022.

Dr. Pulido served Central Philippine University as President from 1971-1996; as Chairman of the CPU Board of Trustees from 2009-2013, and as BOT Member from 2007 till his passing. After 25 years as CPU President he moved to Dumaguete City to become the 11th President of Silliman University (his Alma Mater), from 1996 to 2006. Dr. Pulido also served UP Iloilo in different positions as Dean, Secretary, Instructor and professor from 1962 to 1971.

The Call to Celebration was done with a responsive reading and thanksgiving for the blessed life of Dr. Pulido. His selfless and genuine acts of love and generosity; his exemplary contribution and committed service to CPU and Silliman as President of both universities, and his involvements with many socio-civic organizations were evoked.

An Invocation led by Rev. Ruth G. Lunasco followed the singing of the song “Great is thy Faithfulness”. Tributes were delivered as treasured memories with Dr. Pulido were lifted by Silliman University Chairman of the Board of Trustees, Mr. Ricardo A. Balido, Jr.; Central Philippine University Vice Chairman of the Board of Trustees, Dr. Elmer Q. Pedregosa; and CPU President Dr. Teodoro C. Robles.

Mr. Balido regarded Dr. Pulido as a ‘gift of life’ for his invaluable service to Silliman University. “He commands high respect from members of the Board of Trustees; the man was an institution himself.”

Remembering Dr. ‘Gus’ Pulido, also for his haircut and the white Mercedes Benz (service car of the University President during his time), Dr. Pedregosa called Dr. Pulido as a dedicated University President who’s always willing to serve. He added that, “Dr. Pulido has a penchant for details; full of wisdom and practicality. He was a great man for his simplicity and honesty.”

Dr. Robles in behalf of the CPU Administration, faculty, staff and students expressed his deepest sympathy to the Pulido family. In his tribute, he recounted the buildings constructed in CPU during the presidency of Dr. Pulido – including among others, the Engineering Building, the Rose Memorial Auditorium, the Henry Luce III Library and the Elementary School Building which was later named Dr. Agustin A. Pulido Hall- in his honor. Dr. Robles emphasized that, “Dr. Pulido will be our inspiration as we move on.”
An audio-video presentation showing the late University President deliver his thanksgiving message in a testimonial dinner given by the CPU Board of Trustees was played.

In addition, “Making Meanings of Death” through an Anthem was rendered by the Bahandi Singers. A Comforting Word was given by CPU Office of Communications Director, Rev. Francis Neil G. Jalando-on. He shared that Dr. Pulido is teaching us to live a life of faith, and to ready ourselves to the mission that God has entrusted to us. A prayer for the family was given by Rev. Cris Amorsolo V. Sian, Senior Pastor of the University Church. A response from the family was delivered by Deneel Pulido Enriquez, one of the daughters of Dr. Pulido.