A Campus Tour for the Children: the CPU-K Reopens 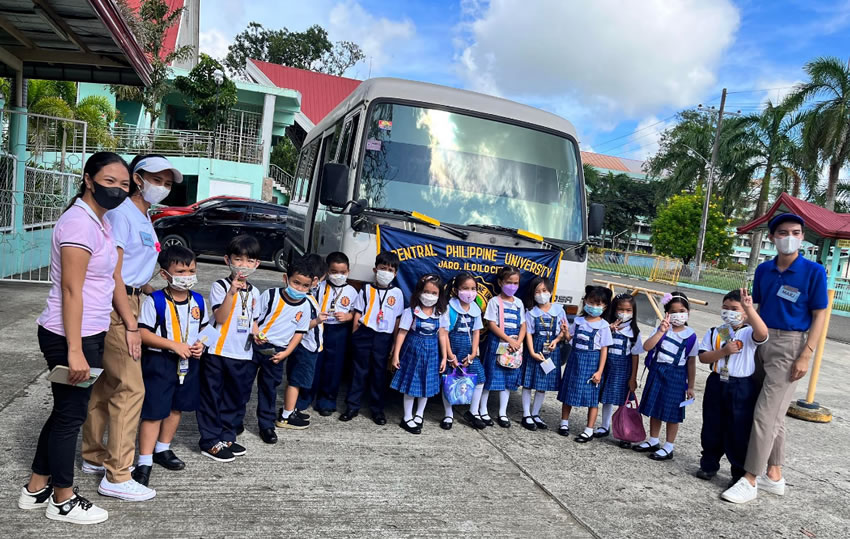 The CPU Kindergarten students toured around the campus with the help of the Tourism students of CHM.

The CPU Kindergarten reopened its classrooms for the pupils in the Kindergarten level in October this year, after almost three years of doing classes online. It is the first time for this batch of pupils to enter the campus. Accompanied by their parents, they took the CPU coaster to tour the 24-hectare campus to see her buildings, grounds, and meet other campus returnees along the way.

The children and the parents of the Kindergarten Gentleness class gathered in the Half-moon early Monday morning in October 4, to take the bus driven by Mr. Ariel Ardiente. The one-hour tour was led by student tour guides from the College of Tourism, Kriss Kringle Inge C. Bancolo and Maribel Sayco, who enthusiastically introduced the campus to the eager little tourists.

The Kindergarten Kindness gathered in the same place in the afternoon to take the coaster and enjoy the tour led by student tour guides Dennis Paul Tapleras, and Rennan Ken Toboso. Both classes were also accompanied by their adviser, Mrs. Ma. Christine T. Getonzo.

The Kindergarten Mercy class of Mrs. Sunsen G. Casiple met early the next day as well, October 5, for their turn on the CPU coaster to enjoy the tour guided by student tour guides Dane Marie Buyco and Marjon Paul Barnezo.

All three tours concluded in the CPU Kindergarten complex where the pupils finally entered their classrooms, learned their routines, and greeted the other teachers and staff. This was also a dry run for the teachers as they briefed their pupils of expectations and protocols as they slowly transitioned to limited face-to-face classes thereon. “The children never run out of energy,” a tour guide recounted. “You can practically feel how hungry they were to be able to finally play with other children, and finally go to school that is not a computer screen.”

It was such a refreshing sight, children running in the hallways and hearing their squeals of delight echoing in the walls of the CPU-K complex. The pre-kindergarten and junior-kindergarten classes will also have their school tours as they have their turn in returning on-site for their classes in November and December respectively. The Lord be praised for his faithfulness to CPU-Kindergarten!